Little did our intern realise about the hard physical labour involved when she undertook to make a felted carpet in 5ft x 7ft size! Reminded of the saying in Tamil language ‘Ilam kandru bayam ariyaadu’, translating loosely to ‘A calf is always raring to go’.

Ah! Didn’t we say this is her first ever felting project?

After doing all the calculations for shrinkage, we made a huge platform by joining 4 tables as it had to accommodate 7ft x 9ft of laying wool fibre!

To make the design template for the carpet, she cleverly deployed a projector. The image was projected to size on a wall for tracing out the pattern using large sheets of chart papers.The pattern sheet was laid on the table, covered by polythene sheets and wool was then laid meticulously to match the pattern. Merino and Corriedale wools were used for the pattern portion. Once wool was laid to the pattern, it was time to fill the backing wool for carpet. The backing wool we used was wool comber noil, which has short fibres. Aiming to achieve 1000 gsm (1kg / sq.meter of carpet), the noils were weighed and laid in layers after layers.

Buckets of warm soapy water were required to wet the wools. Pre-felting was done using hands and then by a sander. Once the back of the carpet was pre-felted, it was time to felt the front, which is the design portion. 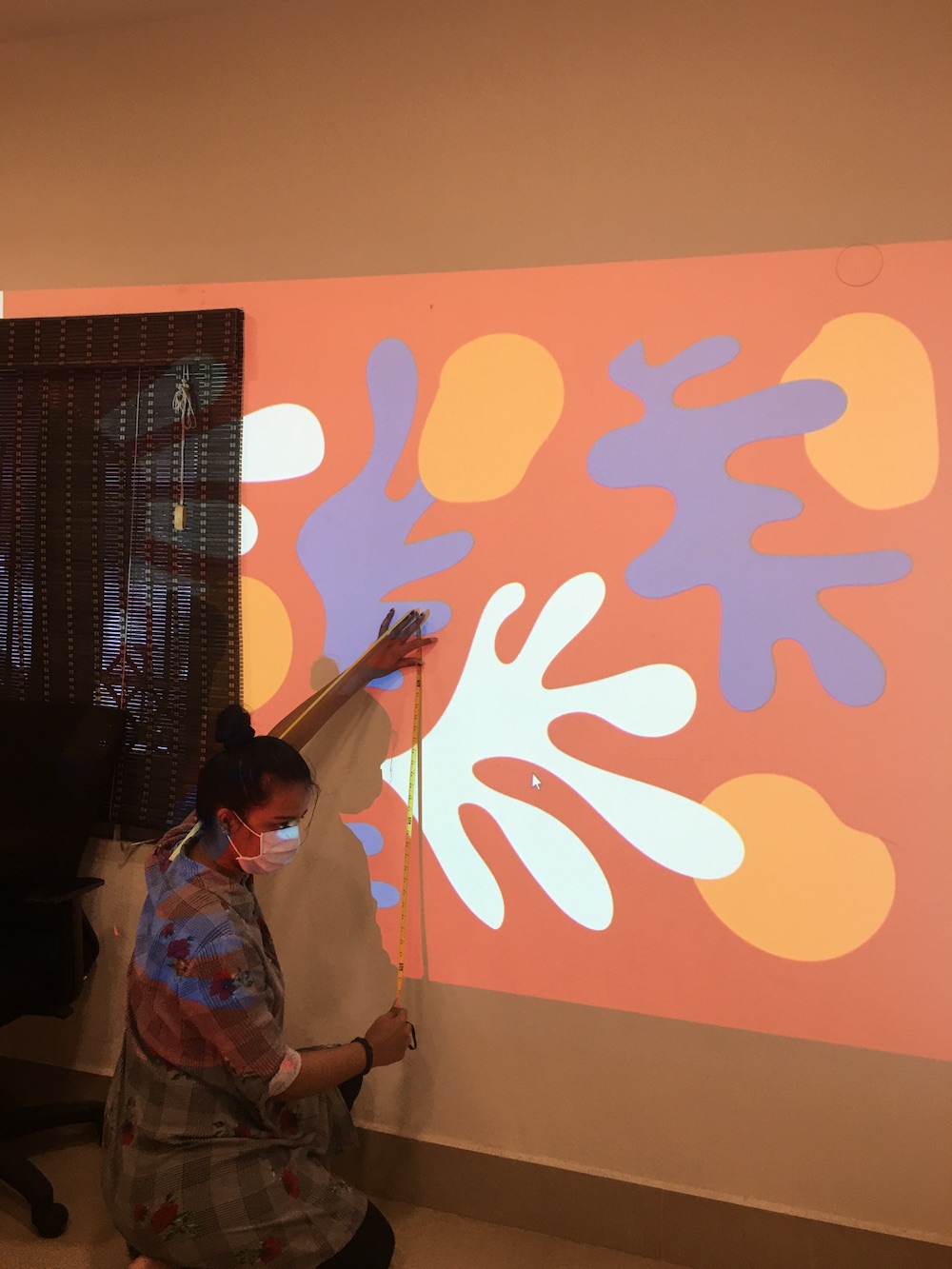 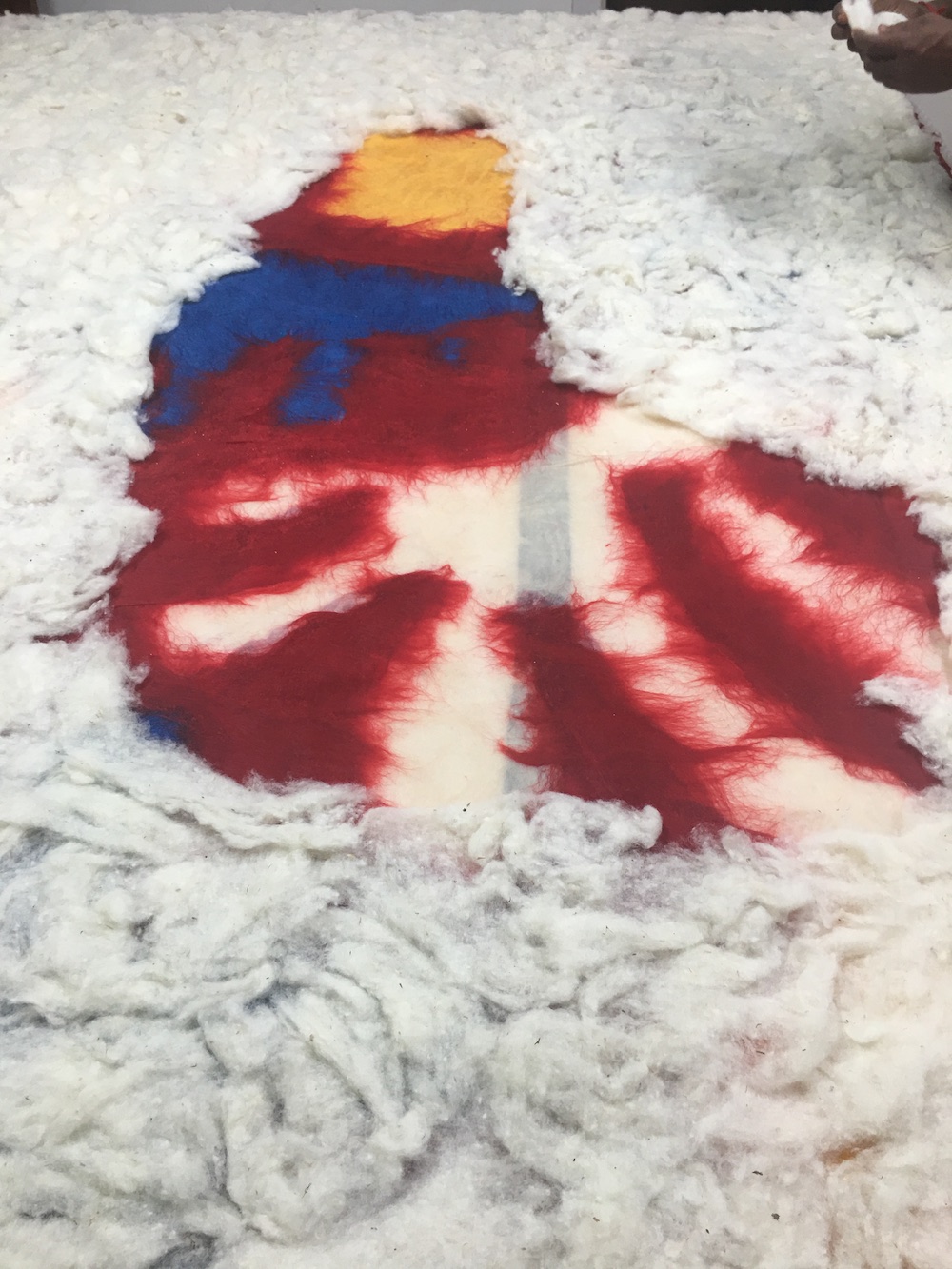 Now, let’s take a pause and reflect on the job in hand.

The wool on the table was weighing close to 5 kgs and then buckets & buckets of water was added for felting…. So, the whole pre-felted sheet was close to about 25 kgs!!! To flip it to the other side carefully without losing the shape was just not easy! More than flipping it, the real worry was how to flip it without affecting the pattern… what happens if the pre-felt falls apart…. We were in a stage where 4 whole days of effort had gone into it so far. So we were obviously concerned! Knowing no fear, the young calf decided to flip it around – just like that. Two of us on the head end of the table and two at the tail end and just tossed it around saying ‘1,2,3’. That was it! Ohooo. Nothing went wrong! After a happy coffee break, we continued the pre-felting on the design portion. 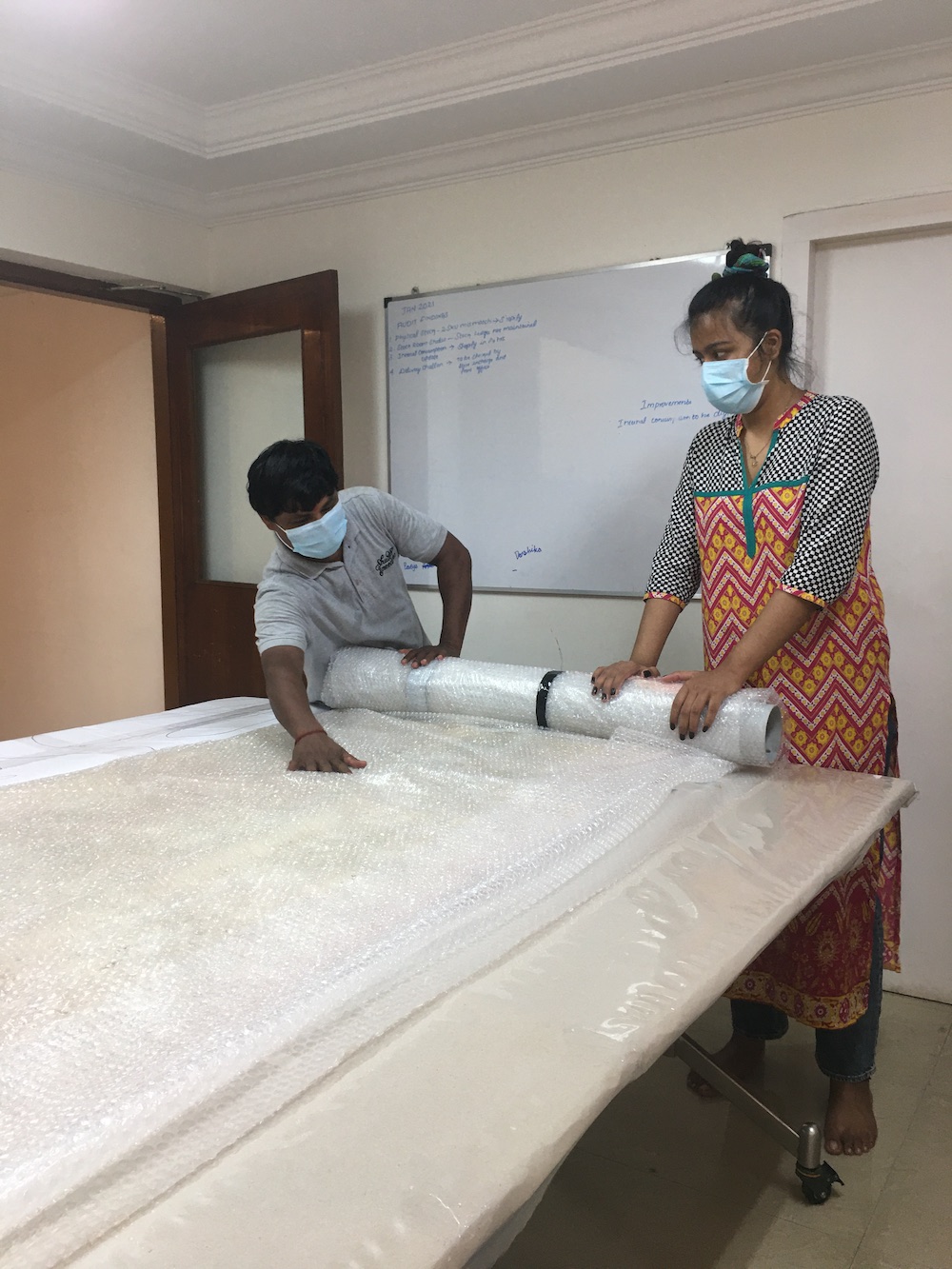 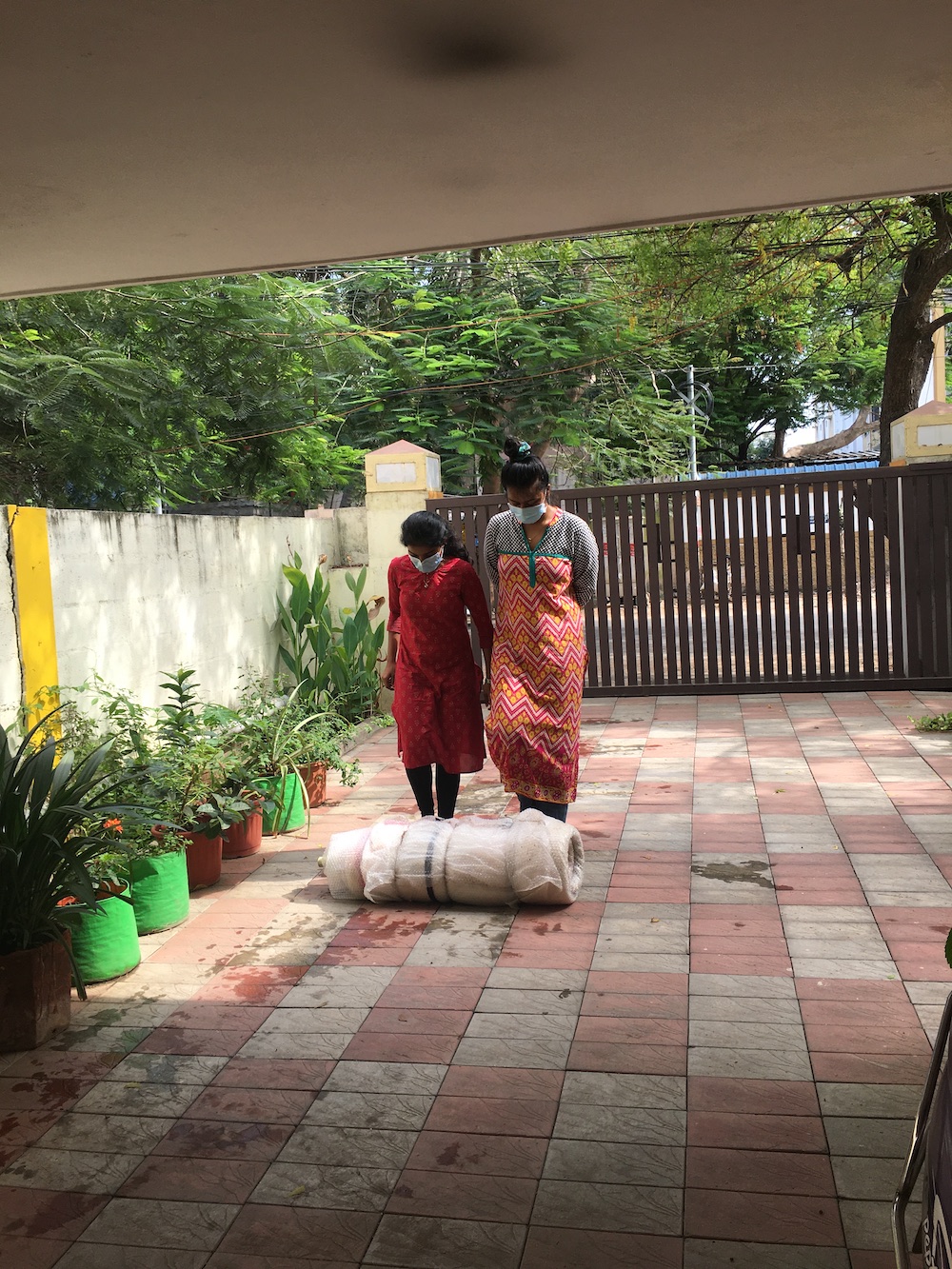 To ease the rolling part, we have recently designed a felting roller machine at the studio. It is doing a great job for light duty felts including nuno-felting. But now we had to task it with rolling a huge carpet.

The machine can usually handle 4 ft wide felts but we have in front of us a 7ft wide carpet…. So, we folded the carpet into two and then rolled the felt. We had a humongous roll, about 3 ½ ft wide and more than 14” in diameter, weighing close to 25 kgs with all the water…. The machine could take upto a maximum 12” diameter… Well, aren’t we on a relentless mission?! To bring the diameter of the roll down, we decided to roll the felt on the floor by literally kicking and rolling! Once it reduced to manageable diameter, we loaded the roll onto our Felting roller machine and switched it on… The machine behaved well and started rolling without any complaints.

After turning and flipping the carpet a few generous times and rolling it on the machine between every flip & turn, it got felted perfectly. Then we were faced with the next question: how to wash this big a carpet to remove the soap? We attatched the car cleaning nozzle in the vacuum cleaner and washed the carpet nicely and then sun-dried.

The carpet looks as happy as we are :) Well, isn’t it worth all the effort looking at the beauty smiling at us? 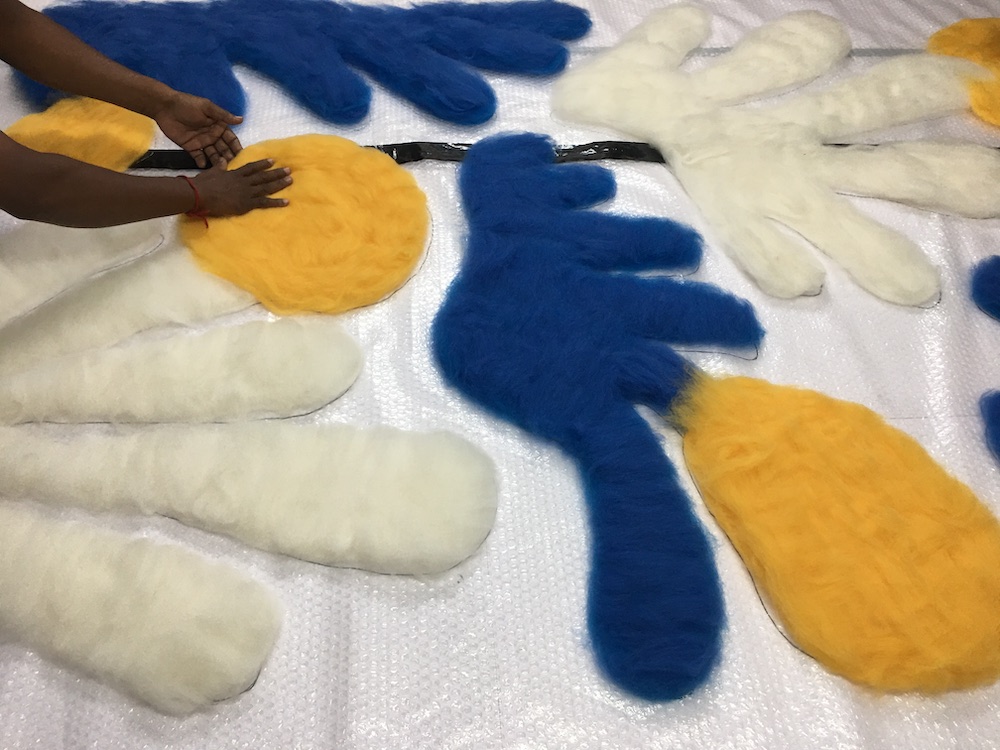 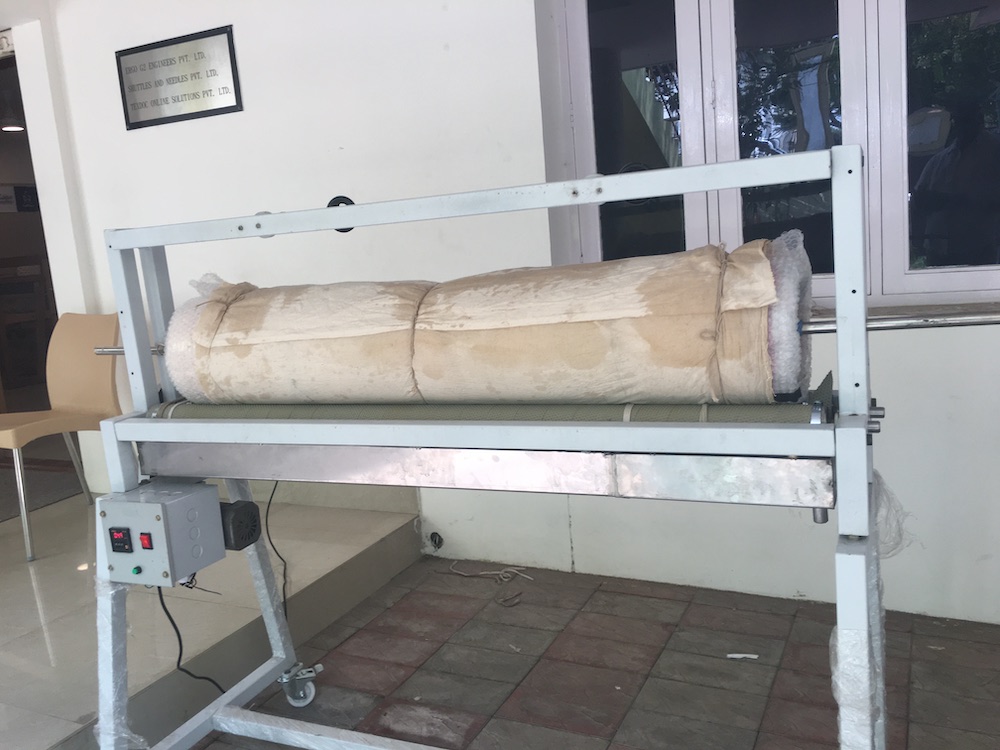 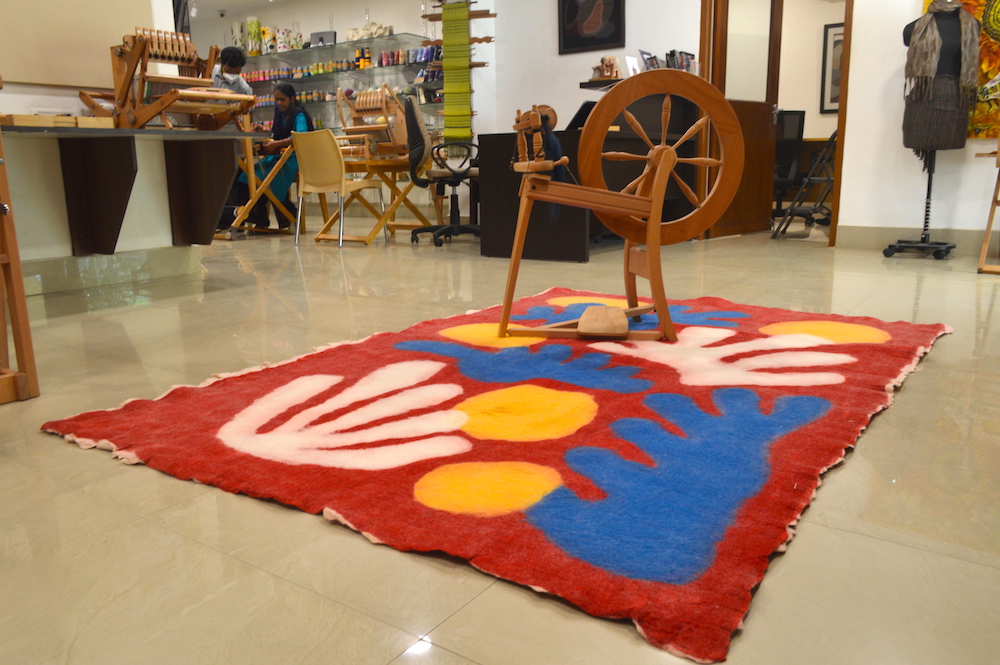 Shuttles & Needles takes interns from design schools and encourages their creative freedom. Check our studio section to know more about our studio.