The talk began with trying to make a collection including cushions inspired by the carefree, joyful mind of a child trying to symbolise the free flow of life with optimism and positivity. But how does one depict the joyous, fun mind of a child through yarns and fibres? This is when the power of forms and colours to boost moods comes into play. When you see a certain combination of forms and colours, it brings back the nostalgic memories of childhood and the inner child.

Inspired by the cut-outs of Matisse, forms that remind us sometimes of a child’s sketch, a vision of a pair of cushions was created.  Felting with wools appeared to be the best medium for this. The fluidity and the flexibility that felting offer to create any forms and shapes were the main factors in choosing felting as the ideal technique. Much like paper, wool could also be felted fully or pre-felted into sheets. And just like the cut-outs, these pre-felted sheets could also be cut into different shapes. This solved the aspect of forms. Corriedale and Merino wools being available in so many colours at the studio made the colour play aspect of the project easier. Now all that was left to do was to felt 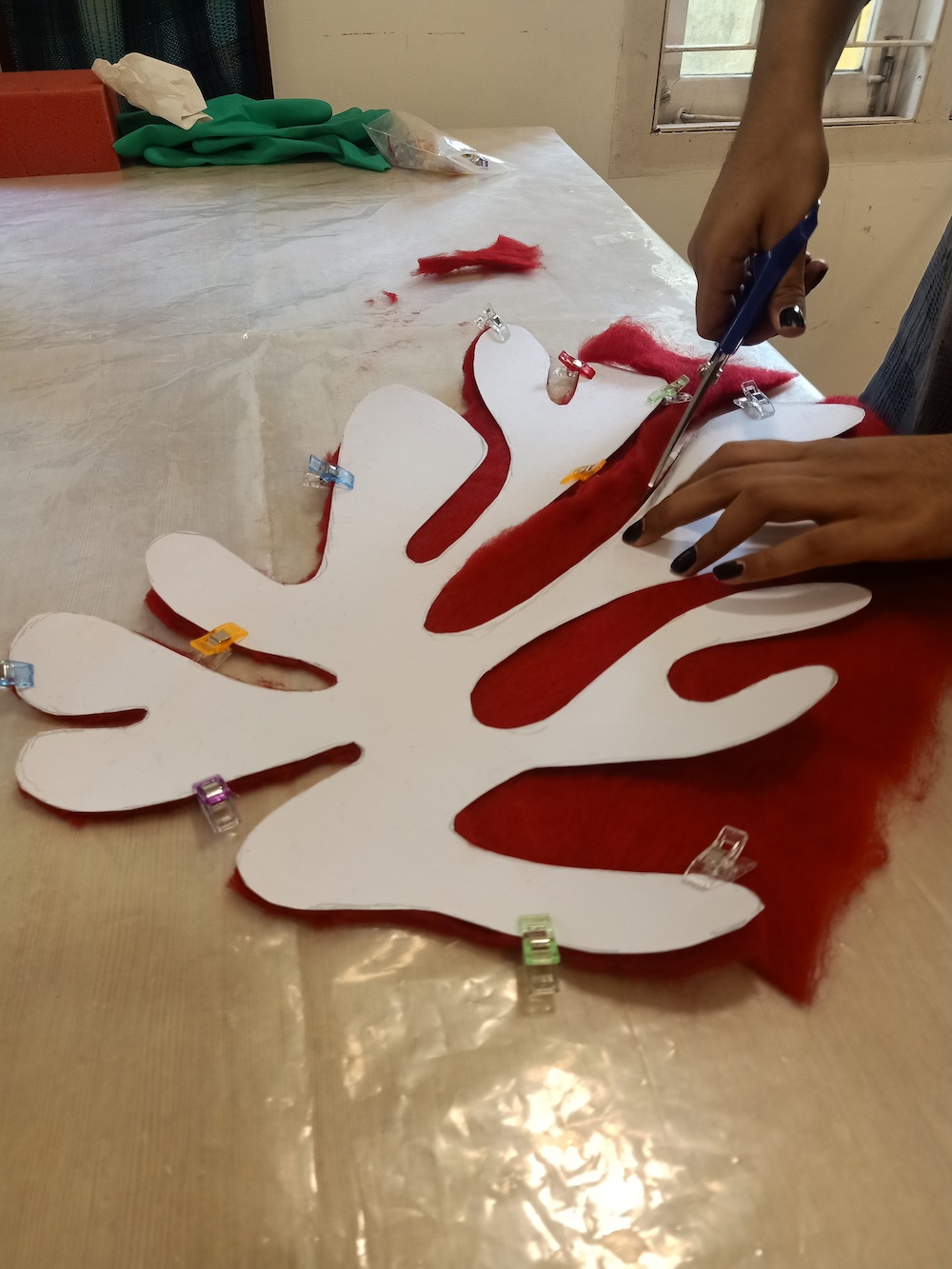 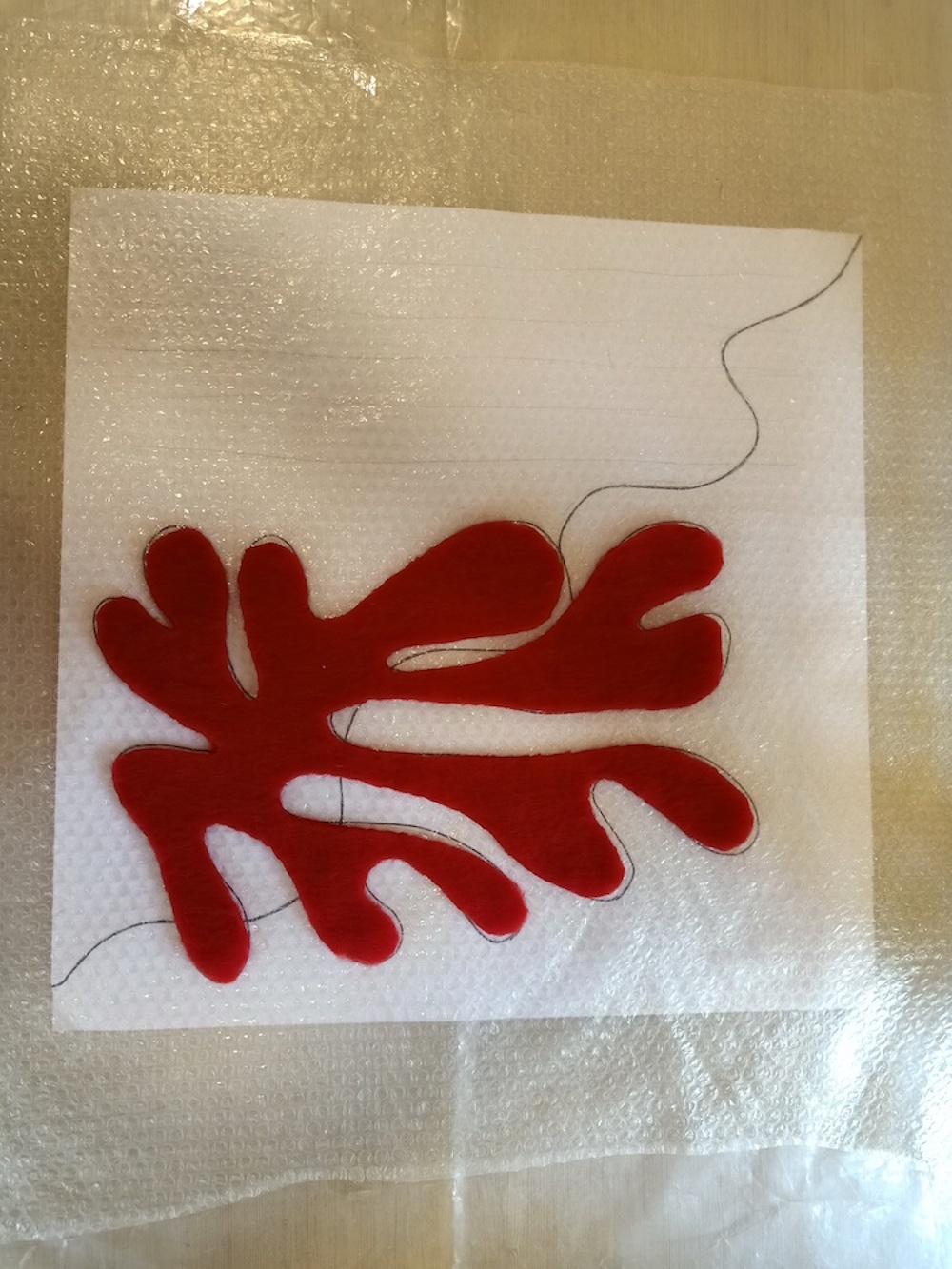 By carefully combining the techniques of pre-felting and wet felting, the cushions were created. The first step in making the cushion was to make the pre-felt sheets for the shapes. This was done by laying out the fibres in 4 or more layers using the Blending board, perpendicular to each other and then adding warm water and soap and lightly rubbing and agitating it. It is to be noted that pre-felts don’t need to be rolled. After a few minutes of agitation, a sheet is formed where the fibres hold onto each other but are not fully felted, meaning they are still slightly fibrous. These sheets are dried fully before being cut into shapes using templates. Once the shapes are ready, it is time to lay the base. 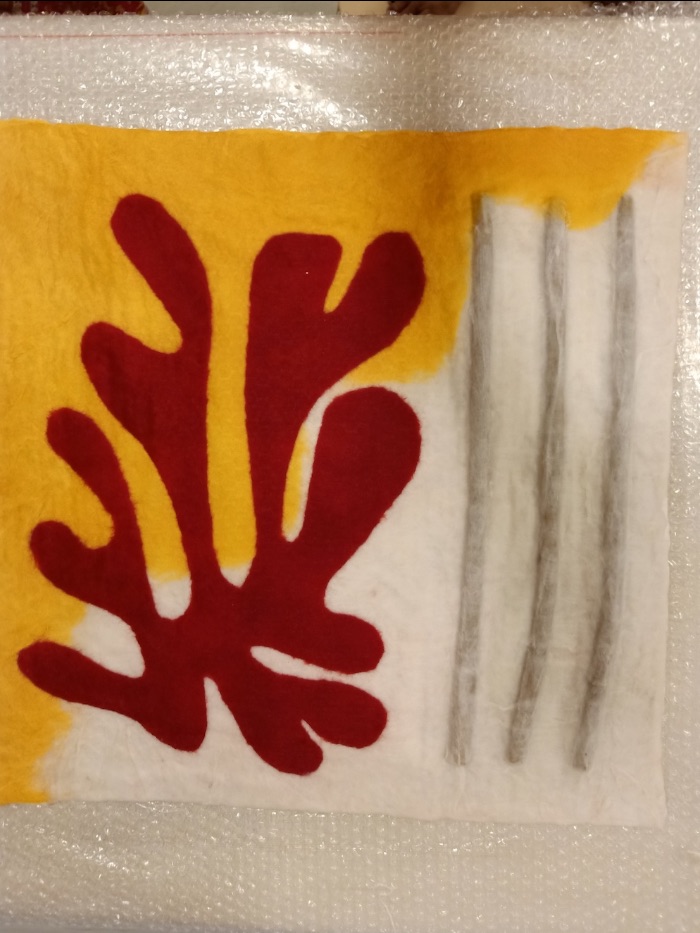 The base consists of two parts, the face and the back. Each of these parts is made of 6 or more layers. If both sides of the cushion have shapes, then the shape is laid down first according to the template. On top of these shapes, the back layer is laid out using wool fibres. Then a layer of bubble wrap is placed on the size of the cushion. This makes sure that a pocket is created to insert the filling. This is called resist felting. After the bubble wrap is placed, the face layer is laid out using fibres. On top of these fibres, the shapes for the face of the cushion are laid out. After all these layers are laid out, warm water and soap are sprayed onto the layers till they are fully soaked. A mesh is placed on top and the layers are pre-felted using hand agitation. Once pre-felted, the layers are rolled together and then fully felted to form a cushion. 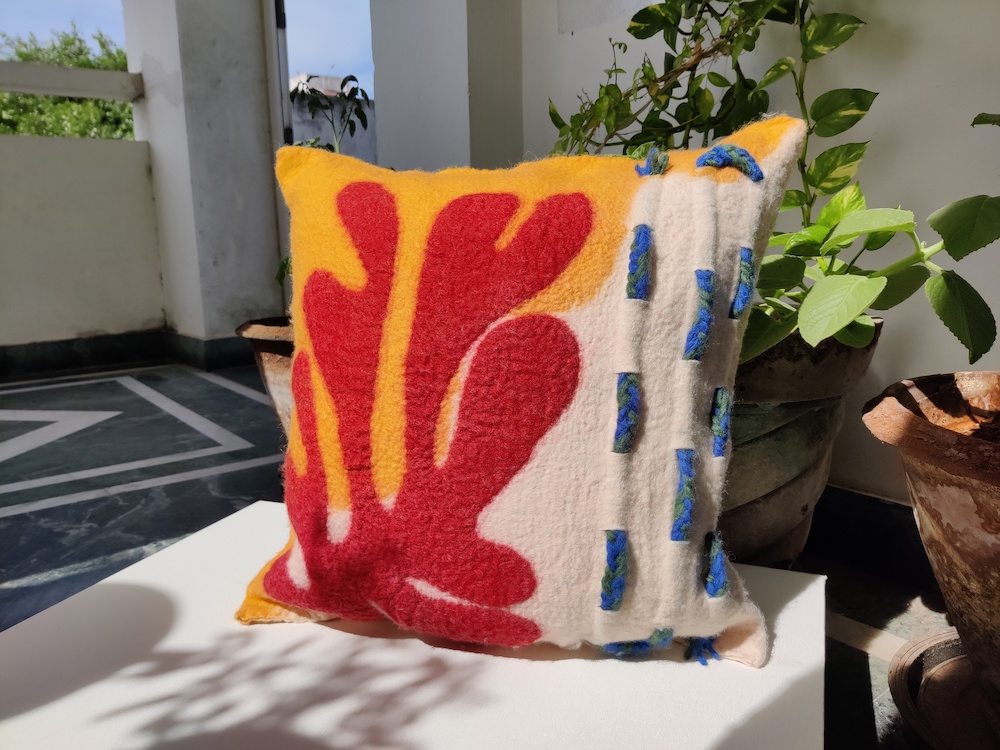